As a foreigner living in China and working in the world of news and documentaries I’ve had many a ‘crazy China’ experience, but one of my more memorable ones came recently. Just before Christmas I traveled to Guangzhou in Southern China, having been invited to be a tutor at a training initiative called DOCROADS. It was being held alongside the annual Guangzhou documentary film festival and was designed as a project-driven creative documentary workshop.

This was the inaugural workshop and the idea was for the students to plan, shoot and edit a short documentary in two weeks. The format was as follows: a week of lectures and preparation, then three days to shoot and three days to edit a short documentary. There were 20 students split into two groups and I was invited to oversee the editing of one of the films and provide a ‘western eye’ to help teach documentary storytelling techniques and editing skills to the Chinese students.

Now, I wouldn’t say I was particularly qualified for such a role; I’d never taught anything before, let alone to students using another language, and my Mandarin skills are terrible. But given that I do shoot and edit professionally (as a cameraman/editor at the Australian Broadcasting Corporation’s Beijing news bureau), and given that I have directed and edited a few documentary films of my own, I thought I’d give it a go. Another tutor had dropped out at the last minute and luckily I was available that week, so I got on a flight to Guangzhou with just four days notice. 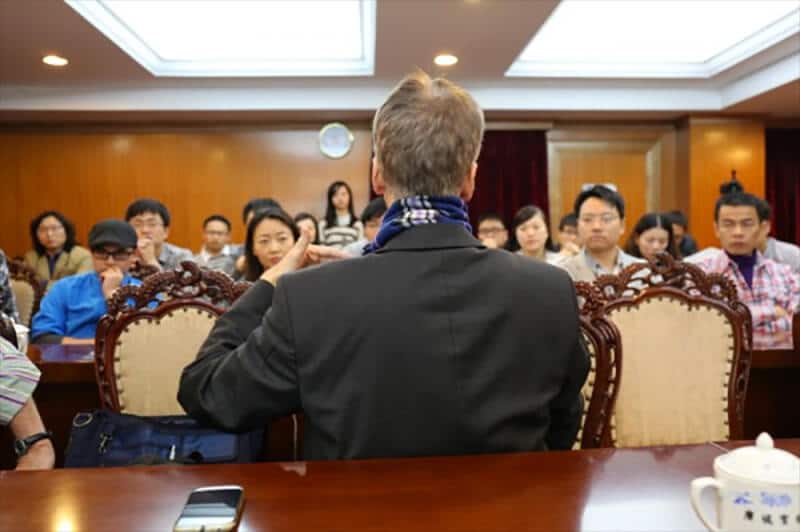 One of the tutors providing feedback on the edits

I arrived in Guangzhou on the last day of the students’ allotted three-day shooting schedule. The edit was due to start the next day and the films were to be edited Wed/Thur/Fri with a screening Saturday morning at 10 o’clock sharp. However as I met up with the course leader it became apparent that all was not well. I don’t really know what happened as I wasn’t there, but apparently there had been ‘political’ problems and there was a sort of mutiny underway. The students (who were from major Chinese TV networks) were no longer willing to let foreigners oversee the editing and they were now going to do it themselves with no input from the course tutors. Whether this was due to the nature of the documentary’s subject, or orders from their superiors, I don’t know for sure. This seemed highly unusual, but if there’s one thing I’ve learnt about working in China, it is to expect the unexpected!

Needless to say, this threw our carefully constructed editing plans out of the window. We had been planning to load all the footage onto our laptops and let the students edit on our computers, each group overseen by one of us. Group A was to edit on Avid and group B (my group) on FCP X. After all the hullabaloo, the new ‘plan’ was that the students were going to edit on their own computers without our oversight and we foreigners were not allowed to have any copies of the footage under any circumstance.

Anyways, that was that; they were editing themselves and I now had nothing to do but hang out. I was looking forward to doing some sight-seeing. I then got a call around lunchtime from the course leader: all had changed, again! The students had now decided that they did now want us to oversee and help with the editing provided it was all done on their own computers (we still weren’t allowed copies of the footage). They were ready to start and I was required immediately. On top of this, the other tutor/editor had to quickly return home for a family emergency so I was suddenly in charge of both the edits. It was now 2pm on day one of a three day edit. As both groups had around 10 hours of material and we’d already lost most of the first day, this was going to be a real challenge!

I had planned all along for my group to use FCP X as that is the program I use professionally and the thought of having to use FCP 7 again fills me with dread! Going back to 7 for me is a bit like watching a VCR compared to Blue-ray disc. The laptops the students had were newish MacBook Pro’s but they only had copies of FCP 7 installed. Luckily for me, one of the students was resourceful enough to quickly install FCP X on all the laptops and we were in business!

My plan was to use FCP X’s great ‘transcode media’ feature to create proxy media of all the footage so that I could load all the footage onto another laptop and each group could have two edit suites up and running at the same time. After an impromptu lecture on documentary editing theory and Aristole’s three-act storytelling structure I got to work giving them a quick introductory lesson on FCP X’s organisational tools and basic editing. Over about an hour I proceeded to show them how awesome a program FCP X is. They were really into it and I enjoyed being a teacher.

We got to work organising the footage. This is where FCP X really shines. It uses a database file to track all the footage in a given project and clips can be assigned any number of keywords as metadata, which is incredibly versatile and powerful. Added to this, the beautifully visual ‘filmstrip’ view in the media browser enables you to very quickly have an overview of your footage without having to watch or scrub through it all. This is one of the reasons FCP X is so much faster than other editing programs as you don’t need to watch reams and reams of footage to find your shots. In my regular gig for the Australian Broadcasting Corporation, more often than not, I’m editing footage that I shot myself and usually not too long after I’ve shot it, so it’s already familiar to me. I rarely actually watch any of my footage until I’m selecting shots for the edit. I just skim over it using the great skimmer tool in X to find my shots and only watch what I need to watch. It’s very efficient. 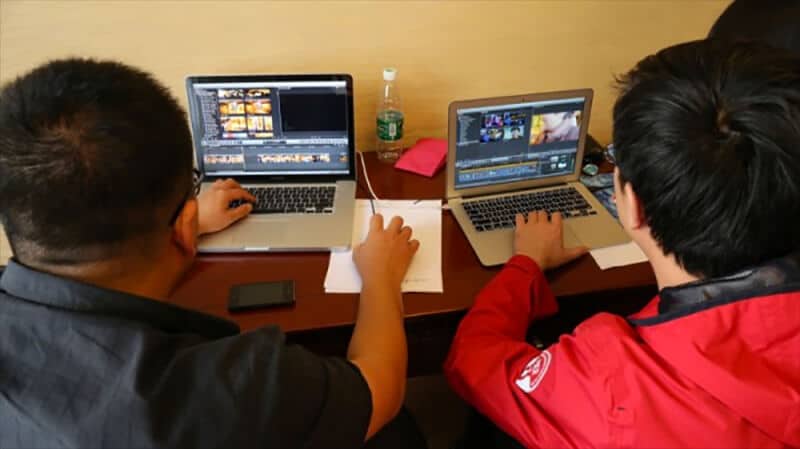 By the end of the first day the two groups were up and running with a basic knowledge of FCPX, but no editing had actually been done. So with just two days left we set them the goal of having a very rough assembly edit done by the morning. Deadlines, deadlines; it’s the only way I get anything done and the groups didn’t disappoint. They stayed up very late and by the morning both groups had produced some sort of rough cut. The next two days were a blitz of editing. I pretty much let them get on with it. We had a hotel suite that we completely trashed, one group in the living room and the other in the bedroom. I just bounced between each group teaching them more and more of the program as we got closer to the deadline and as different features became useful for the particular stage of editing. On the final day we worked from 9am to 4am. 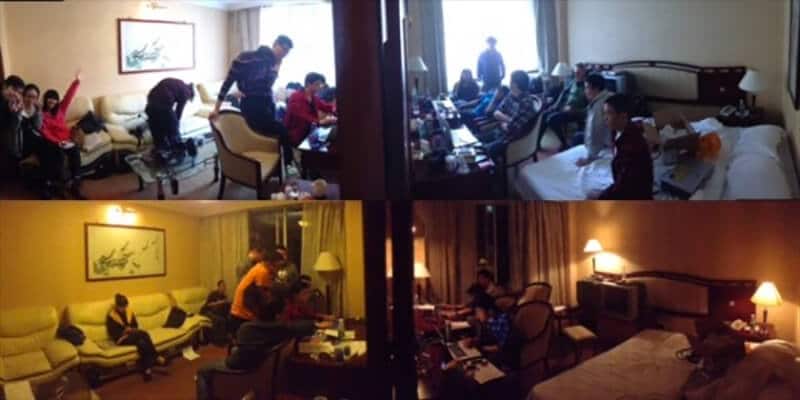 Working day and night: editing under the gun in a hotel room come edit suite

It was actually quite amazing to see how quickly the students picked up FCPX and ran with it. With a very basic lesson from me, and from a standing start, they were able to get up and running and finish a project all within X in just three days. The results were pretty good given the constraints. The films were shot on Nikon D800 DSLRs. Nikon in Greece had kindly loaned the cameras to the DocRoads organisers as well as two sets of Nikon prime lenses. The footage looked very nice from these cameras and lenses as you can see in the final pieces (one below and one at the top of this post).

For me, I learnt several things from this crazy experience. Firstly, that I know FCPX well enough to teach it, that I actually enjoy teaching and, if you’ll forgive me, I dare say I was quite good at it! Secondly, I learnt what an amazingly intuitive program Apple has created with FCPX. I certainly struggled to learn it but that is because it completely screws with your head if you’re used to ‘legacy’ style editing software like Adobe Premiere, Avid or FCP7. These programs were designed as progressions to early online editing software but what Apple has done is to completely throw out the script and ask the question: If we were to invent editing now, how would that look? I think that in the not-too-distant future the kids coming through will all be editing on X. It will be the most accessible (and affordable) editing software for new generations of content creators who will be clipping at our heels before long. My purchase of FCPX has proved fantastic value for money with nine updates (three major ones) in quick succession, completely for free. With the latest major update coming for free as well, I wouldn’t be surprised if we didn’t have to pay for an upgrade for years! That seems to be the way Apple is going with its software; they really want people to use their programs and they are giving them away for ever cheaper amounts. Mavericks was free as are all the iLife apps now. Perhaps FCPX is next?

I keep meeting people who say things like FCPX is not a professional program, they’ve only heard bad things about it etc, etc. I then always ask, have you actually used it? Invariably the answer is no, at which point I gently mock them. It’s like builders arguing over who has the best hammer: pathetic. Everyone to their own, but for me, FCPX hits the nail on the head, every time. 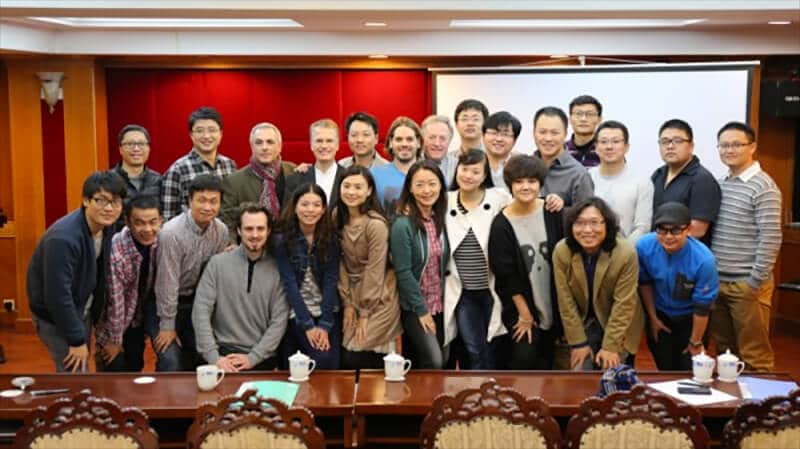 Happy students after the Saturday morning screening; several of us had only slept for a few hours

For more information about DOCroads, visit the official website.

This piece originally appeared in Newsshooter on 31 May, 2012 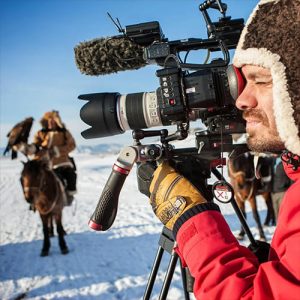 James is an award-winning cameraman and documentary filmmaker based out of Bristol in the UK. Having spent many of his early years following his father around the Pacific islands, he has developed a taste for travel and adventure. Thanks to his work as a documentary cameraman he is experienced in shooting with a range of styles and on a variety of cameras, and has a natural empathy with people of all cultures. Read more about James.

Tweets by JBaylissSmith
jamesbaylisssmith.com uses cookies to analyse traffic via Google Analytics and to improve your experience while visiting the site.OKLearn more